Ever since my neighbour Jaka, (God rest his Slovenian soul) plied me with his homemade Slivovka – the clear, strong spirit that is plum šnopc (or schnapps) some 10 years ago, I had been eager to join the making of it.

I remember my first visits to my neighbours, when Jaka would dole out the stuff regardless of the hour. Despite the somewhat ‘interesting’ flavour, me being British and therefore legally bound by British etiquette and politeness, I would of course finish the entire glass and remark how delicious Jaka’s šnopc was.

My contorted face clearly didn’t betray my true feelings, and encouraged by my apparent fondness for the spirit and pleased that he had found such a fan of his creation, each time I finished my glass, Jaka would immediately refill it. My protests had no effect and I would be once again faced with the prospect of draining another draught.

I eventually learned that in order to not become drunk on šnopc before midday, I had to fight my British instinct to politely drink all that had been poured, and risk potential offence to my host by leaving my glass at least half full. 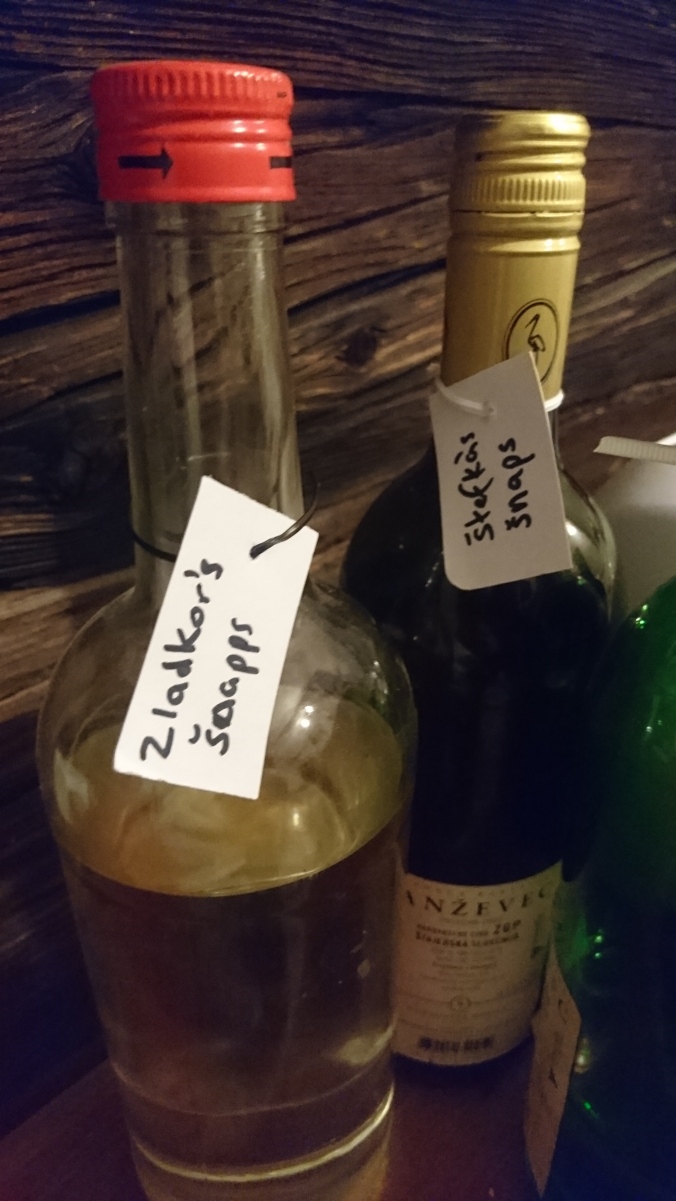 Unlike in the UK, where the distilling of alcohol without a license is highly illegal, resulting in heavy fines and prison time, in Slovenia it’s permitted and popular, especially in the countryside.

After a decade of drinking it, this weekend, in the Kingdom of Breg, I was finally able to get involved with the making of this most Slovenian spirit. 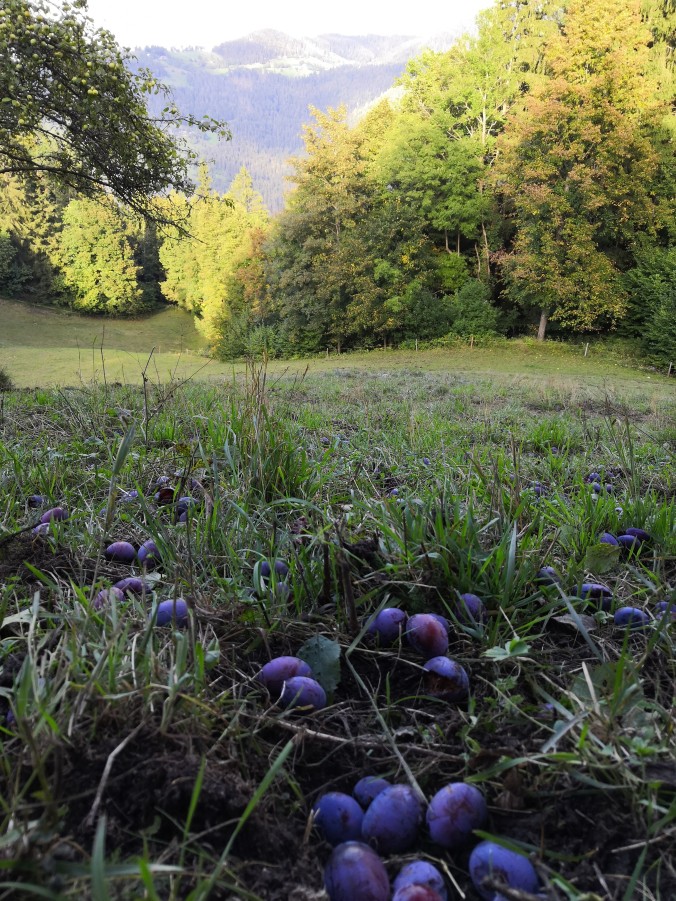 I sat at the little table outside the house, where I was given – a small glass of schnapps (of course!). It was a clever move by Ančka – the Kingdom of Breg’s matriarch; a little taste of what was to come, if I put in the hard work. And Stage 1 of making Slovenian schnapps is to harvest the raw materials.

The one and only ingredient required for the most popular variety of schnapps is slive – plums. By design, The Kingdom of Breg is rich in this asset; successive generations of residents have planted and maintained a significant orchard of plum trees, the oldest of which are now around 100 years old.

The process started with each tree undergoing a thorough shakedown with a hooked pole. This relieved the branches of their burden and created a purple plum carpet beneath each of the 50 or so trees.

After a quick tutorial on quality control from Štefka, regarding which plums were v redu (OK) to collect, and which were to be rejected, I began to fill my bucket with the purple fruits. Once all our buckets were full, I was tasked with transporting the fruits via wheelbarrow, to the schnapps making HQ – Štefka’s barn – where the contents of each bucket was poured into a large, plastic barrel.

There was no washing of the fruit. Alongside our purple gold, each barrel contained a ‘seasoning’ of grass blades, stalks, the odd leaf, earth, an ant or two and the occasional spider. Once a barrel was full, it was simply sealed and left to liquefy and ferment. Nothing more was added. I appreciated the simplicity of the recipe, and it is probably a reason why making schnapps is so popular in Slovenia.

Whilst the procedure is simple, the work itself is more taxing than I expected. With thousands of plums to pluck from the ground and dozens of full buckets to be hauled up hilly terrain, it was hard on the back. Štefka alluded to this as we gathered plum after plum, hunched over with bent backs, and she exclaimed:

I had to agree. For the first couple of hours, I was having great fun in my plum-picking bubble, but by the end of the day, my back was stiff, my body aching, and I was looking forward to the end.

Of course, the day was punctuated with numerous pauza – breaks in which I sat with the rest of the work crew: Štefka, her mother and matriarch Ančka, and two more of their friends, and was offered beer, cake, salami, bread as well as a lunch of potato salad, boiled eggs and sausage.

During these breaks I ascertained that each 300 litre barrel of plums would eventually produce about six litres of schnapps. The strange thing is, that neither Štefka, nor Ančka drink the stuff. However, it seems to be a good currency here in the Slovene Hinterlands and therefore a valuable asset to stockpile.

Now the hard work of the plum harvest is done, we must wait until January by which time the plums should have fermented nicely and we’ll be ready for stage 2 of the process; the distillation.

I plan to be present.

UPDATE: I was present! Read Part 2: Making Schnapps in Slovenia: The Cook

One thought on “Making Schnapps (Šnopc) in Slovenia: Part 1”