Last weekend I headed up to Breg House to do a few jobs I wanted to finish before the winter snows fell. But I ended up getting roped into to dismembering an entire cow and being taught the finer points of butchery at a local family farm.

The farm belonged to my neighbours’ sister/daughter. I had met them several times in the past, and they had invited me to visit. Finally the day had come when I took them up on their kind offer, as I was running some errands in the vicinity of their home.

The farm sits just metres from the Austrian border. Indeed, some of their farmland is actually on the Austrian side of the border, a slightly unusual arrangement which may make their application to the ‘Farmers Without Borders’ organisation somewhat  tricky.

It was about 11am when I was welcomed into their house by Marjeta, and instantly offered coffee, and schnapps. As I was quite thirsty I asked for a glass of water. Marjeta produced a small glass of schnapps, along with a small blue bottle from the fridge. This, I assumed to be the water, so uncapped it and took a massive swig only to discover it also contained schnapps! It was quite the faux pas, and I scambled to explain in broken Slovene my mix-up and why I had just downed half a bottle of her homemade Slovenian spirit. 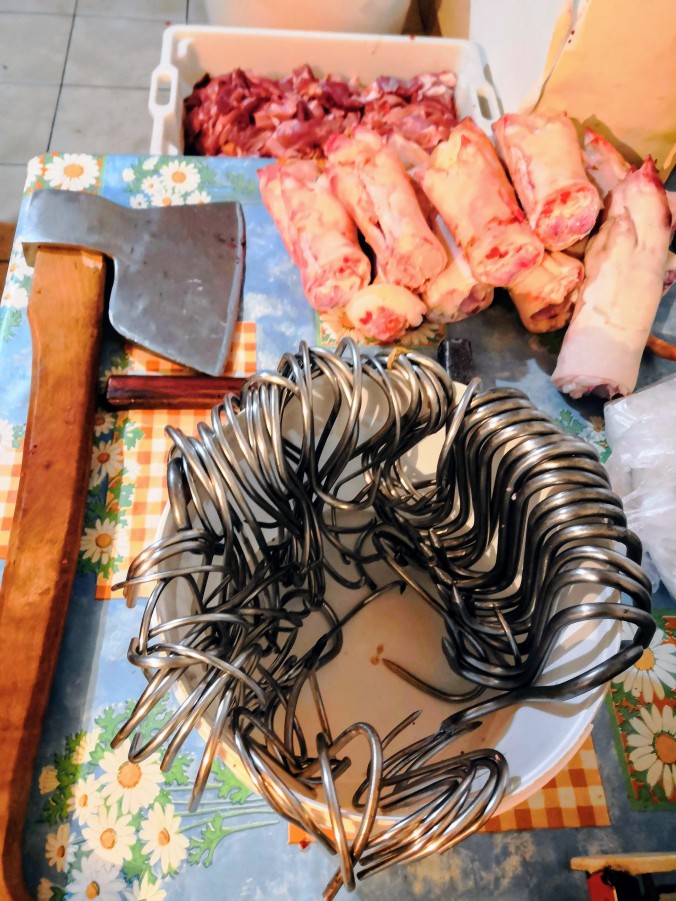 We sat for some time chatting. It was great for me to get a chance to really practice speaking Slovene. As I have previously noted (see: Struggles with Slovene: 6 months of learning Slovenian), one of the downsides of Slovenians being, on the whole, excellent English speakers, is that most of my day to day conversation at work is in English. But in the hinterlands of Koroška, it is often out of necessity that I must (try to) speak Slovene. And though I know I still sound like a caveman, it is the best practice I can get, and I was able to ask numerous questions about life on the farm.

After a round of pork and bread, it was time for me to be put to work. So I headed downstairs to the meat room – to find Dani, the man of the house, and two of their friends Marko and Neva, slicing, dicing and sawing up a cow. They explained that the vast majority of the meat would end up as sausages and salami, with just a few choice cuts being used as steak or mince.

I was intrigued to learn about the process of butchering, so they armed me with a knife, dressed me in an apron, and demonstrated the process of removing the fat from the muscle tissue. Apparently, butchering your own meat is a long-standing, once-common Slovenian tradition. Known as koline, there’s a strong social element combined with the task, so it’s a sort of meat-butchering, sausage-making party. However, the practice is nowadays less prevalent than it once was. 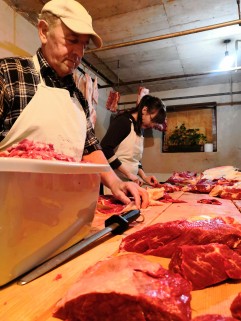 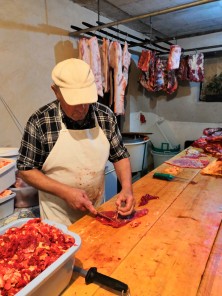 Now, watching my Slovenian workmates, the process looked easy. But in practice, I found it was not. There’s a delicate technique required to gently remove the layer of fat without wasting any meat, and it took me some time to find the right angle of the blade and cutting action that would best allow the fat to come away quickly and in one piece.

I spent the whole afternoon de-fatting and chatting with my fellow butchers. It’s an often fiddly task, but with Neva’s patient tuition, I improved as the day went on. The day was punctuated with cake, coffee and beer breaks to ensure the workforce was kept contented. It was also interesting to really feel and see how different the various cuts of the cow were, in terms of the muscle tissue, fat content and general texture.

Dani was kind enough to give me a full tour of the farm, where he showed me his cow shed, cat collection (they have eight), impressive log supply (no danger of a log crisis here!) and his cider-making operation, where I was given a sample.

By early evening, Danjela and Mitja – the daughter and son – had returned home. Both of them speak excellent English, so I was able to ask some of the more complex questions that my basic Slovene had prevented me from asking. It also happened to be Mitja’s birthday – so yet more cake had to be eaten!

There is something I love about learning how life works here in Koroška. Getting involved in the traditional practices like this is a pleasant contrast to my day job, working for a blockchain company in Ljubljana.

I left with improved blade skills and the desire not to eat another piece of cake for some time.

Ever since my neighbour Jaka, (God rest his Slovenian soul) plied me with his homemade Slivovka – the clear, strong spirit that is plum šnopc (or schnapps) some 10 years ago, I had been eager to join the making of it.

I remember my first visits to my neighbours, when Jaka would dole out the stuff regardless of the hour. Despite the somewhat ‘interesting’ flavour, me being British and therefore legally bound by British etiquette and politeness, I would of course finish the entire glass and remark how delicious Jaka’s šnopc was. 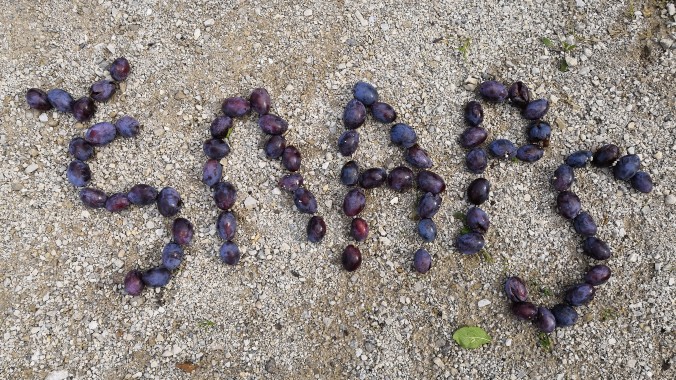 My contorted face clearly didn’t betray my true feelings, and encouraged by my apparent fondness for the spirit and pleased that he had found such a fan of his creation, each time I finished my glass, Jaka would immediately refill it. My protests had no effect and I would be once again faced with the prospect of draining another draught.

I eventually learned that in order to not become drunk on šnopc before midday, I had to fight my British instinct to politely drink all that had been poured, and risk potential offence to my host by leaving my glass at least half full.

Unlike in the UK, where the distilling of alcohol without a license is highly illegal, resulting in heavy fines and prison time, in Slovenia it’s permitted and popular, especially in the countryside.

After a decade of drinking it, this weekend, in the Kingdom of Breg, I was finally able to get involved with the making of this most Slovenian spirit.

I sat at the little table outside the house, where I was given – a small glass of schnapps (of course!). It was a clever move by Ančka – the Kingdom of Breg’s matriarch; a little taste of what was to come, if I put in the hard work. And Stage 1 of making Slovenian schnapps is to harvest the raw materials.

The one and only ingredient required for the most popular variety of schnapps is slive – plums. By design, The Kingdom of Breg is rich in this asset; successive generations of residents have planted and maintained a significant orchard of plum trees, the oldest of which are now around 100 years old.

The process started with each tree undergoing a thorough shakedown with a hooked pole. This relieved the branches of their burden and created a purple plum carpet beneath each of the 50 or so trees.

After a quick tutorial on quality control from Štefka, regarding which plums were v redu (OK) to collect, and which were to be rejected, I began to fill my bucket with the purple fruits. Once all our buckets were full, I was tasked with transporting the fruits via wheelbarrow, to the schnapps making HQ – Štefka’s barn – where the contents of each bucket was poured into a large, plastic barrel. 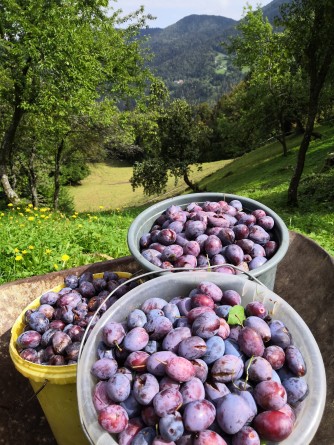 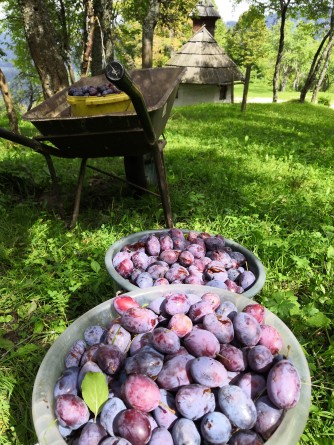 There was no washing of the fruit. Alongside our purple gold, each barrel contained a ‘seasoning’ of grass blades, stalks, the odd leaf, earth, an ant or two and the occasional spider. Once a barrel was full, it was simply sealed and left to liquefy and ferment. Nothing more was added. I appreciated the simplicity of the recipe, and it is probably a reason why making schnapps is so popular in Slovenia.

Whilst the procedure is simple, the work itself is more taxing than I expected. With thousands of plums to pluck from the ground and dozens of full buckets to be hauled up hilly terrain, it was hard on the back. Štefka alluded to this as we gathered plum after plum, hunched over with bent backs, and she exclaimed:

I had to agree. For the first couple of hours, I was having great fun in my plum-picking bubble, but by the end of the day, my back was stiff, my body aching, and I was looking forward to the end.

Of course, the day was punctuated with numerous pauza – breaks in which I sat with the rest of the work crew: Štefka, her mother and matriarch Ančka, and two more of their friends, and was offered beer, cake, salami, bread as well as a lunch of potato salad, boiled eggs and sausage.

During these breaks I ascertained that each 300 litre barrel of plums would eventually produce about six litres of schnapps. The strange thing is, that neither Štefka, nor Ančka drink the stuff. However, it seems to be a good currency here in the Slovene Hinterlands and therefore a valuable asset to stockpile.

Now the hard work of the plum harvest is done, we must wait until January by which time the plums should have fermented nicely and we’ll be ready for stage 2 of the process; the distillation.

I plan to be present.

UPDATE: I was present! Read Part 2: Making Schnapps in Slovenia: The Cook